SAZYC SOJOURNS
The Port Huron REstatement
The Evening and Morning Altar has begun!
CLICK HERE for more info
Hear the story!
​A Synopsis
I have been musing for the last several years why God sent me to Port Huron back in 2016. I have always ministered in highly strategic areas. But Port Huron? I knew St. Clair County Community College, kitty-corner from the church I now pastor, had a  part. But I felt there was more.

During my time here, I found out that a very historic event happened in this area. In 1962 the Students for a Democratic Society (SDS), led by U of M graduate student Tom Hayden, felt that they needed to deal with racial and economic injustice in the midst of a very materialistic time and culture. They met just outside Port Huron and composed The Port Huron Statement. It became the Constitution for their movement ...and for a huge segment of future influencers.  Students in that movement became the future professors and leaders in all aspects of society, influencing generations of other students and culture as a whole. I believe we're seeing the full unfolding of that statement manifesting in our government and culture today.

Their motive was noble - justice, especially in the area of racial justice. It was much needed then. It is still needed today.  And the issue is at the very center of our cultural debate today. I believe God is bringing it to the forefront for a purpose. Care for the poor and economic justice was and is an issue worthy of attention as well. However, justice movements without Jesus at the center often lead to gross injustice.  While one group may gain a measure justice, it often happens at the expense of another group. There are economic injustices in the world. There are racial injustices. And the most vulnerable, the unborn, are facing what may be the most horrifying injustice in human history.

Our church always starts our year with a week of prayer. Usually, I come to prayer with an agenda. We'll pray through our vision or mission statement. But this year I felt very strongly that I needed to spend the week getting God's agenda. And boy did I get one! One evening during this week of prayer, as I called those with me to mourn before the Lord (something we don't know how to do very well). As I lay on the floor, I suddenly received what I can only describe as a high speed "download!" I felt the Lord saying that he wanted a Port Huron REstatement. And on the matter of a moment, my agenda for the next 18 months came to me in a closed vision. This REstatement isn't about composing a document at first (but will eventually result in one), It is actually about a year-long "statement" involving night and day prayer, as Ephesians 3:10 says, "to the intent that now the manifold wisdom of God might be made known by the church to the principalities, and powers in the heavenly places." Accompanying that, there will be conferences, revival meetings, a symposium of student leaders that will compose a document, and things I don't know yet. It will commence mid June of this year until mid June of 2012 - the 60th anniversary of the Port Huron Statement


A little background on me. Back in the 80s & 90s, I led Chi Alpha at the U of M for 9 years. Chi Alpha is campus ministry. with chapters across the nation. We became a large group and a national internship program for Chi Alpha. I then pastored many years and traveled as an itinerant teacher for several years. During those years, I established houses of prayer in Ann Arbor and Dearborn. In 2015, I was asked to become the Area Director for Chi Alpha for Metro Detroit.  Funny thing, during all those years of ministry I always had a heart for this little college in Port Huron. One Sunday I came to speak at a church kitty-corner from the campus. They were without a pastor. And suddenly I found myself drawn to this little church. To make a long story short, I ended up accepting the pastorate and began to strategize on building a Chi Alpha on that campus.

While putting up posters, I met the Metro Detroit Area Director for Intervarsity, another national campus ministry. We later had coffee. A real connection happened, and the rest is history. I decided instead to help him with Intervarsity. He moved to another assignment. I felt a similar connection with the new Area Director, and have been helping her with Intervarsity. These are PHENOMENAL people! And when she pressed me to participate in the Intervarsity opening conference of the year, I could not believe the theme:

College students changed the world in 1962, My hope is that today's college students will be at the center of this "REstatement." We will need an army of young people from around the whole region, state and nation to be equipped and inspired by some Generals in the faith. Please pray with me as I am talking to many local, regional, and national leaders in strategic ministries across our land.
​A link to the Port Huron Statement - ​(WARNING! It is not an easy read! A video summary is below)
​http://www.progressivefox.com/misc_documents/PortHuronStatement.pdf
​
A link to our first Port Huron Statement Steering Team Zoom call. Powerful insights!
https://us02web.zoom.us/rec/share/wymMjX_cvkuWyOPKTIf-OW7WRkmZQGPsEwQVKaqvfQLU5eEuPITfM1A5nsKj3lBF.pooXBT-twCqHrkrd?startTime=161231168000o
​God's design for spiritual vitality involved the assembling of his people for appointed times. King Hezekiah of Judah brought a revival to Israel by calling the people to commemorate Passover for the first time in a long time. In this story, we see a pattern on how to call people to gather, and what do once they're gathered. The goal: widespread awakening! 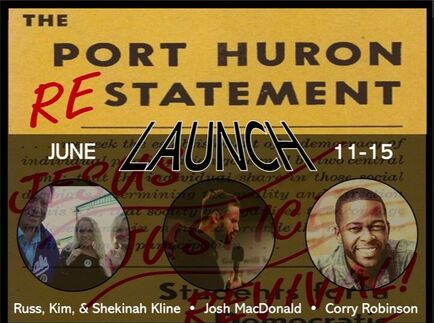 WOW! What a conference!
​Videos of this powerful conference can be found at
​https://therestatement.weebly.com/media.html